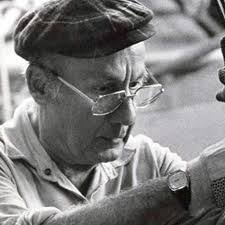 Fulvio Bianconi was born in August 27th 1915 in Ponte di Brenta, province of Padova, near Venice. His parents were Emo and Elvira Bianconi. His father was a musician, his mother a housewife and his sister Lidia was born a few years later.

From a very young age, Fulvio showed an inclination towards drawing. His mother was the person who helped him win a scholarship that enabled him to get accepted in the Carmini convent. From the age of 15 to 17 he worked as an apprentice decorator in the Murano furnaces, an experience that was to be proven precious in the future.

In 1933, Fulvio met Dino Villani who immediately understood his artistic and expressive potential and introduced him to Mondadori, Motta, GI.VI.M and other important Milanese companies. During the war and until 1943, he worked in Rome and, miraculously, escaped the Nazi killings of Rasella street. After the army, he continued his work as a graphic designer with various publishers, ending up at Garzanti with whom he was to work continuously until 1975. After that they also worked on their more important editions until after 1990.

Fulvio Bianconi was always on the look for new forms of artistic expression. Alfonso Gatto wrote in the preface of the book ‘Fulvio Bianconi’s drawings’ (published by Garzanti ) that Bianconi is the ‘designer of the Seven Leagues’ and he first came to glass and Murano in 1945 with an assignment by GI.VI.M. to design bottles for a series of perfumes at the Venini furnace, working with glass masters Ermete and Arturo Biassuto (nicknamed Boboli). It was then that the passion (the ‘hobby’ as he called it) for glass was born. A passion that was to make him famous all over the world. A passion that, especially after the death of Venini in 1959, was initially not well accepted by the Murano furnaces where he used to go to create different glass objects with his own hands. This was mainly because they were reluctant to make things different from their usual production of lamps, mirrors, vases, drinking glasses, beads and other product lines they were producing.

Also, he has been the first artist who portrayed human beings in glass, thus breaking the tradition of glass being a secondary material as far as artistic expression is concerned. A believer in the maximum creative freedom of the artist, with absolutely no ties to hierarchy nor industrial clichés, he always liked to plunge in person into the creative process.

"...Artistic glass has to be unique. When you repeat it, it loses its charm..."

Moreover, was really passionate to his art and always wanted to create with absolute freedom of expression and with no restraints and obligations. Through this process, hundreds and hundreds of unique glass artwork came to form the intrinsic basis of Murano’s reputation, as a place of production of artistic glass.

For over 30 years he was the mind behind the external image of Garzanti, one of the most distinguished and prestigious Italian publishing houses. He also has contributed to the image of FIAT, Marzotto, HMW, Pathé, Columbia, Pirelli and other brands. He was a close friend of Gaetano Sperati, Bruno Munari, Zavattini and many other important figures who have helped shape Italy in the last half of the twentieth century.

Fulvio Bianconi both as a person and artist, expressed a way of thought and action which belongs to a world now almost extinct. That which would hardly be able to exist in an age when ethical, behavioural and existential guidelines have undergone a deep change in all levels of society.

Fulvio Bianconi by working relentlessly in more than 60 years of activity, has designed thousands of book covers, has illustrated books, created thousands of unique glass objects as well as many paintings; in which, according to the whim of the moment and his need to experiment with different materials and techniques, he used pencil, tempera, oil paint, xylograph, zinc etching, ink, paper, wood, markers, photographs and every other material he found suitable to express himself.